DOOM Eternal (and DOOM 64) has been out for a few days and I have to say, what a crazy few days it’s been. Crazy as in, the game is crazy fun. I take a lot of games fairly seriously, but with DOOM Eternal, it’s just serious fun and that’s all anyone really wants from a video game at the end of the day.

So, before we get into it, it is important to know that this is a direct sequel to DOOM 2016. If you’re interested in learning about what brought events to unfold, you will want to venture back to DOOM (2016) and play through it. Other than that, let’s get into the nitty gritty of things.

DOOM Eternal takes place 2 years after DOOM (2016) and things have gotten a little grim. 60% of the earth’s population has been wiped out and the planet is overrun with demons and the like. The only hope is you, The DOOM Slayer! Back with a slew of new weapons, it’s time to fight for the Earth’s salvation and send these demons back to hell!

Graphically, DOOM Eternal delivers the goods. There is a lot of detail in the environment, but even more so in the characters you come across. Fighting off hordes of demons is rewarding in many ways, but taking a moment to actually look at the fine art of these grotesque creatures is pretty amazing. As I played through, I just couldn’t help but look in awe at what I was about to cut in half with a chainsaw. Definitely one of those “take the time to smell the roses” scenarios, but don’t gock for too long. They do want you dead after all.

The gameplay is smooth and the controls setup well. It is easy to navigate through your arsenal of weapons and move your Slayer around the map. Add some maze like puzzles to the mix and a badass storyline and you have DOOM Eternal. 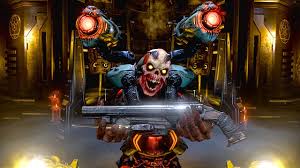 Your weapons available are much more than meets the eye here. You can add two modifications to each gun you carry and have one active. If you don’t care much for the active mod you have on, you can switch it to the other (so long as you have unlocked both mods) and see what works best for you. While you can always run out of ammo, you have a trusty chainsaw at your side. Just slice one of those demons in half and they’ll drop ammo for you. The same goes for health and armor. You can perform a glory kill to gain extra health drops and use flame belch to gain extra armor.

Along the way, you will be able to upgrade more than just weapons. You will be able to upgrade your Slayer’s suit and other abilities such as your dash recharge rate.But there is actually a little more this title has to offer you. Grab a copy of DOOM Eternal and you’ll receive a free copy of DOOM 64 remastered. I played through DOOM 64 and I have to say, it really is amazing to see just how far DOOM has come. Infact, I have the first 3 remastered DOOM titles on my PS4, playing through them in sequence is like a video game journey through history. 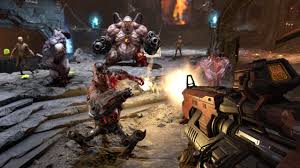 If the campaign isn’t enough for you, there is also a sweet little multiplayer variant you can play called Battlemode. Two players are chosen to play demons while one is chosen to play the Slayer. If the Slayer can defeat both demons before the first one killed can respawn, DOOM Slayer wins the round. If the demons manage to defeat the Slayer, the demons win the round. The side with the most wins out of 5 matches will walk away the victor. Both the campaign and multilayer are pretty intense, so buckle up for a bumpy ride.

If you’re looking to have some serious fun, but not looking to be overly serious, DOOM Eternal is an excellent that gives a lot of good play value. Although, I do wish they had added more to the multiplayer than one game mode. All in all, I give DOOM Eternal 8.5 out of 10. It’s great fun and slaying demons just doesn’t get old.